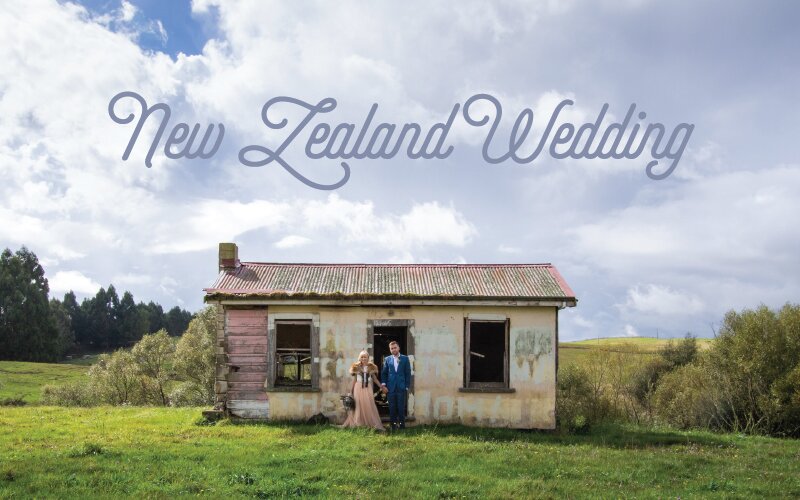 Together forever, since ages ago.

Meet Katie Blackstock & Rupert Goldsmith. Otherwise fondly known as the amalgamation of their two surnames "The Goldstocks". This gorgeous pair fell in love when they were scrawny little teenagers. All up they've been together for 16 years, so when Rupert finally popped the question they decided not to wait any longer and pulled out all stops to seal the deal within just 5 short months!

They always knew that they wanted to get married at Rupert's family holiday house near NZ ski-town, Ohakune. A big challenge that they had, was that the tiny property had no electricity and could comfortably fit a maximum of about a dozen guests! Their toughest decision was choosing to only invite their immediate families – which was a grand total of just 12 guests altogether!

The lack of power and isolation of the property meant that everyone invited had to roll up their sleeves and chip in to make the day a success without the help of a fridge to cool the home-made elderflower champagne, or an oven to cook the freshly-caught snapper for dinner! DIY was their underlying theme, and getting everyone personally invested in the day made it even more memorable.

Their wedding day was anything but conventional. They woke up in the same house together, Rupert kindly kept up his tradition of making Katie breakfast, and they helped each other get ready (Rupert was caught ironing his bride-to-be's wedding outfit that morning!). The pre-ceremony photoshoot swept them away, and they turned up an hour late to their own wedding! Oh and to top off their unique approach – Rupert himself walked Katie down the aisle!

It sounds like there were so many stories to be told from this intimate little affair, so we got together with Katie in Brisbane and asked her a few questions about her unique rural wedding day... 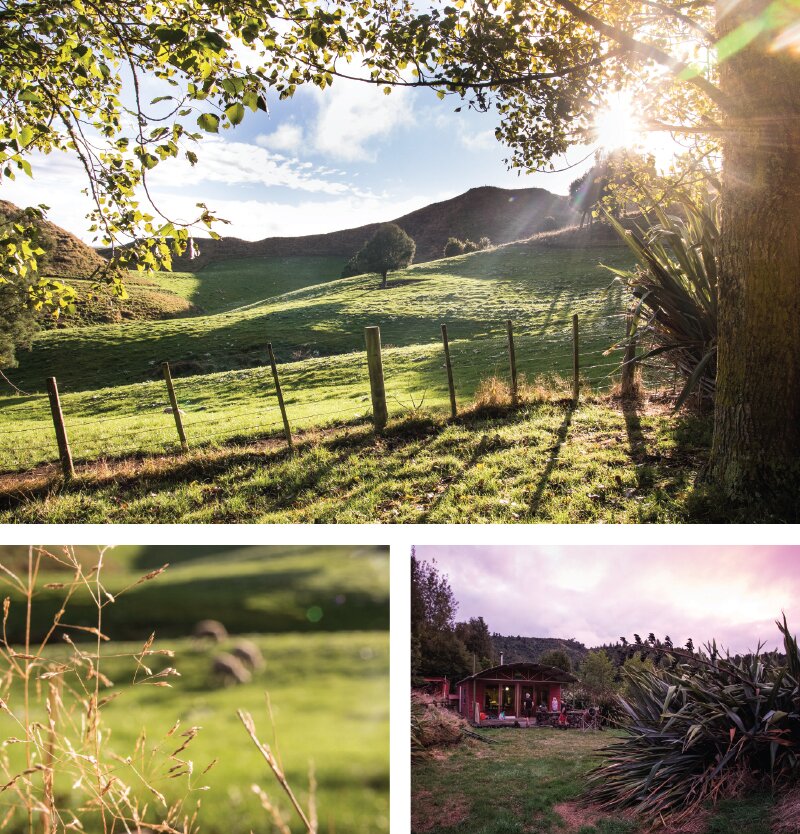 How did Rupert pop the question?
One sunny day in October 2015, a mere 14 years into our relationship Rupert and I were skiing at one of our frequent haunts (Turoa Skifield – Ohakune, NZ). He asked me to go out of bounds to do a ski run (always one to lead me astray), and as we were skiing with his dad it was his chance to get me on my own. He took a stop in the middle of the run with not a soul in sight and very sweetly asked “will you marriage me”.

I was to keep the ring under wraps until we got down the mountain to the rest of his family. I’m surprised his dad didn’t start asking questions when I spent the whole trip home in the car including a visit to the supermarket with my ski gloves on!

How long was your engagement?
Only 5 months. Since we got engaged we hadn’t given it too much thought as to when we would get married but we knew we didn’t want a big or traditional style wedding. At Christmas a couple of months in we had Rupert’s parents over from NZ on holiday and they randomly suggested the 26th March so we just ran with it. Then they also bought us an early wedding present so that really locked it in! It was probably good they gave us the kick up the bum we needed to get started as we likely would still be engaged if they didn’t. 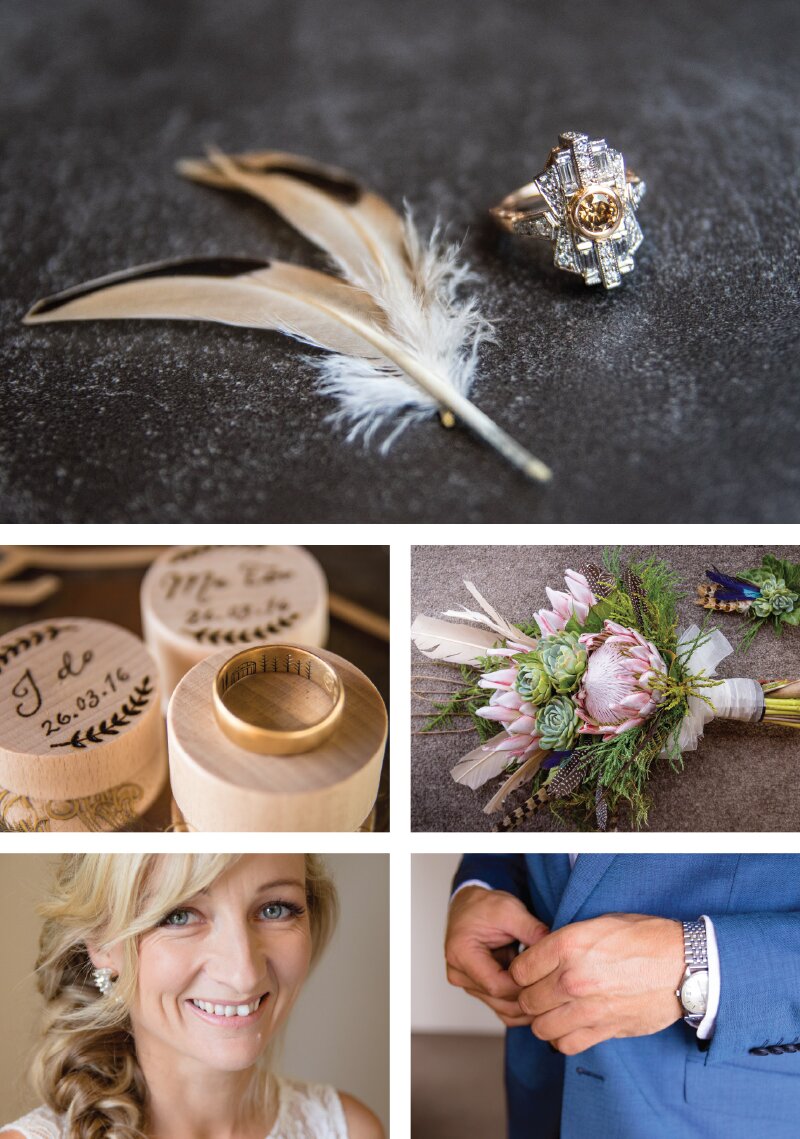 Any funny stories from the lead up to the wedding?
Hiding it from all of the friends and family was pretty funny, but also one of the hardest parts about it. When we left at Easter to go to New Zealand our friends in Brisbane (and NZ for that fact) were none the wiser until we arrived back with the big surprise.

Me being a pro-procrastinator really came to a head when I still hadn’t written my vows in the few days before the wedding! Things got a little crazy when we arrived in NZ and finding time alone to write them was a little difficult (so many excuses). The morning before the wedding I took a tiny childs plastic chair out into the middle of a paddock with nobody around (or so I thought) so I could finally get it done.

Tell us more about the 'Red Shed' where you decided to get married?
Right from the get-go it was very clear there was only one place for us, and that was on the holiday property of Rupert’s parents in Ohakune, NZ where we got engaged.

It’s an absolutely beautiful location on bushland, nicely out of the way with no power, very little mobile coverage, and just a coal range for heating and cooking…bliss!
The place is very dear to us and we have spent a lot of time there together over the years creating many fond memories. It is also the place where Rupert’s late sister planted a forest of Red Wood Trees which are now a few metres tall and you will see from some of the later photos of us in the trees how spectacular it is up there. 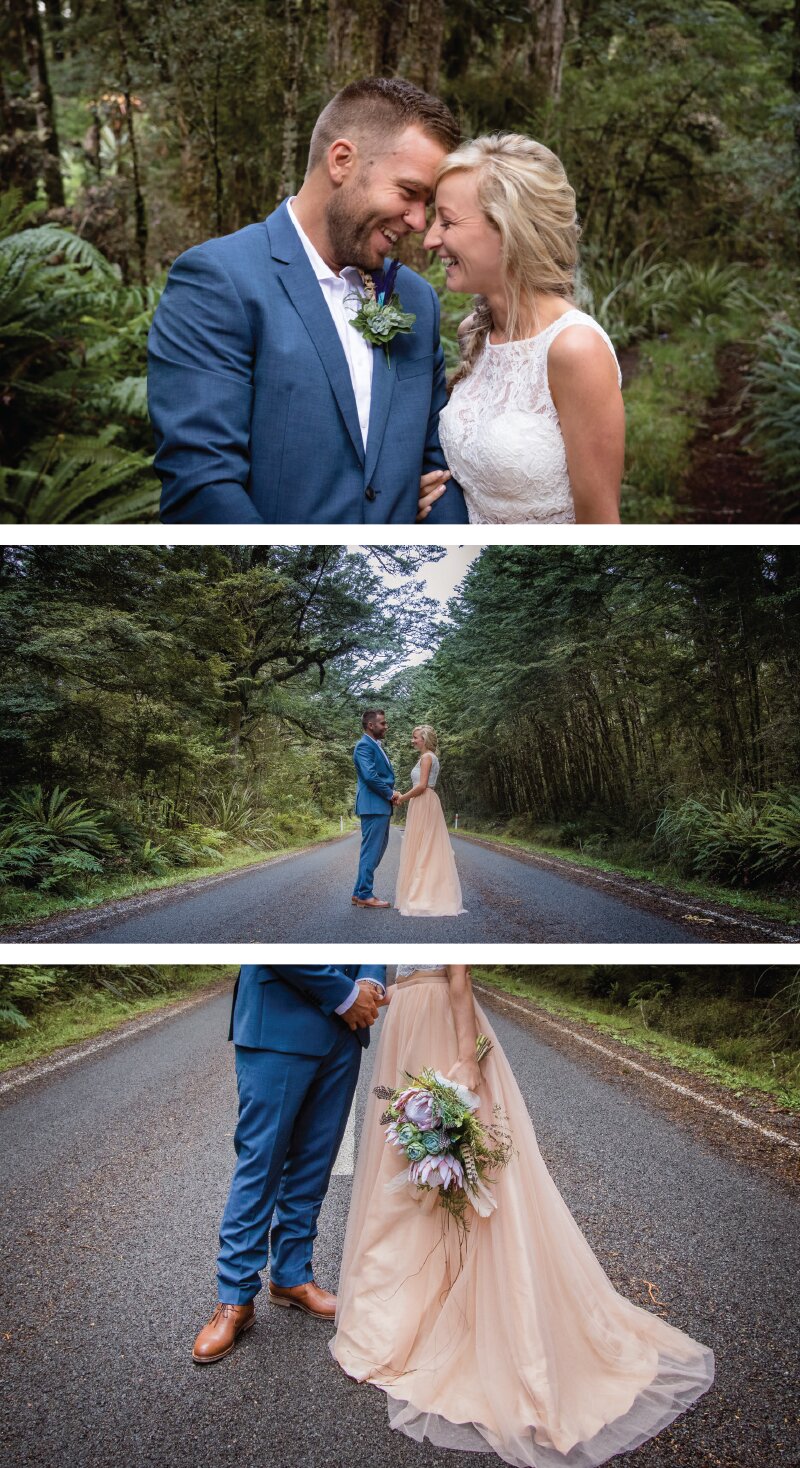 What inspired your wedding theme?
The theme was really just based on the location we chose. It was a very informal and relaxed affair with a dash of boho and a whole lot of DIY. It was all about family for us and we certainly had all hands on deck for the occasion. We were like a well oiled machine and not one person who shared the day with us did not get involved and help us out in some way.

Aside from the celebrant, the florist and the hair and makeup ladies absolutely everything else was in-house. Rupert’s parents even had a few secrets of their own with custom made aprons (Black & Gold as was becoming a theme to go with our last names) they made and wore on the day while prepping food and gave to the guests to take home. They also arranged a surprise bagpiper who arrived at sundown to play a few tunes. I used to play bagpipes so felt pretty emotional about it all.


Did you have a favourite photo of the day?
During our photoshoot, we went back up to the skifield where Rupert proposed. Being March there was no snow on the ground, but it still was drizzling and icy cold up there! Due to the white out conditions, we decided not to stick around too long to take photos – you could barely see the mountain! Our photographer didn't want us to get too wet & cold, so we opted to move onto our next photoshoot location before the rain set in. In the moment she called us back to the car, Rupert picked me up to walk over the puddles and she snapped a very candid moment of us walking back under an umbrella which really captured 'us' in that moment. 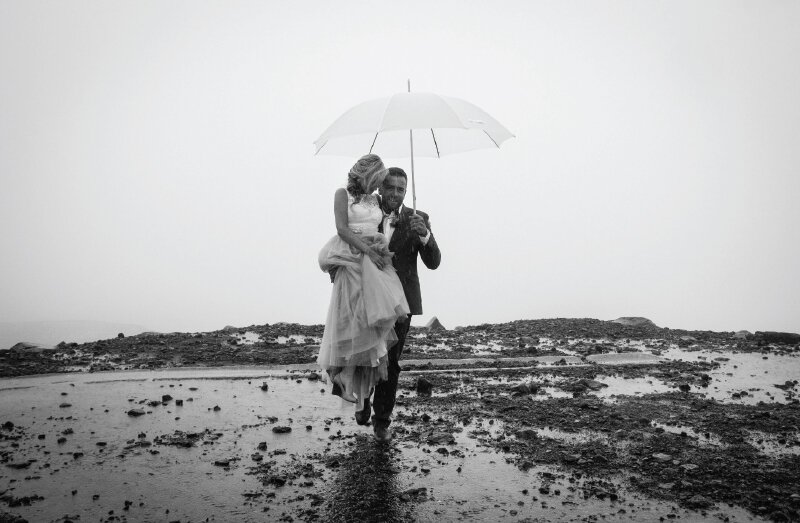 So we understand you're quite the DIY-ers, tell us more about how much DIY you undertook?
It’s pretty hard to avoid a lot of DIY when you have 3 architects in the family. Most of the day was DIY right back to the building of the ‘Red Shed’ – the family bach where it all happened designed and built by Rupert’s parents many moons ago.

Due to the lack of power at the property one of the biggest challenges was lighting the place tastefully and with enough to cook and eat under. Rupert and his sister devised a plan to use old sail fabric lying about to make beautiful pendants. They used car batteries as a power source and got it all rigged up the day before and it worked incredibly well.

My dad the mechanic also fixed up my little old yellow car so it could get back on the road again and brought drove it up to the mountain for us. All food and refreshments were made by the guests including fish caught by my brother in law Blair Haase and beer and elderflower champagne brewed by my other brother in law Ari Stevens. All of the styling for the day was devised and DIYed by ourselves and Rupert’s Mother and Sister. Foliage for the bouquet, button holes and the table was picked from the property by Rupert’s Mum, and the soundtrack for the day was made by every guest who we asked to let us know some of their favourites. Rupert’s parents also spent many weekends in the run up to the event building stone walls, a servery and many other things to make the day grand.

And we're just dying to know who made your 2-piece dress?
I went into a few stores in Brisbane and the Gold Coast but was a bit disheartened when I just didn’t see anything that was me. I was pretty set on having separates as I NEVER wear dresses and I was also keen to include a bit of colour as opposed to having all white. I was starting to feel a bit concerned that I wouldn’t find anything and given the short time frame ordering anything wasn’t an option especially on such a limited budget.

A friend and work colleague (saviour) of mine suggested I try a wonderful lady she and her mother had used for various occasions over the years and so that was how I found Ella! She was just fantastic from the moment I met her and I couldn’t recommend her highly enough. She was so lovely, and she listened to what I wanted all the way through the process. There was none of the pushiness/fakery that you find in some dress stores and she was very honest. She created the most incredible top and skirt, even better than I could have imagined and all in a really tight time frame to budget. If you’re after a beautifully made one of a kind dress check her out at Ella Moda. 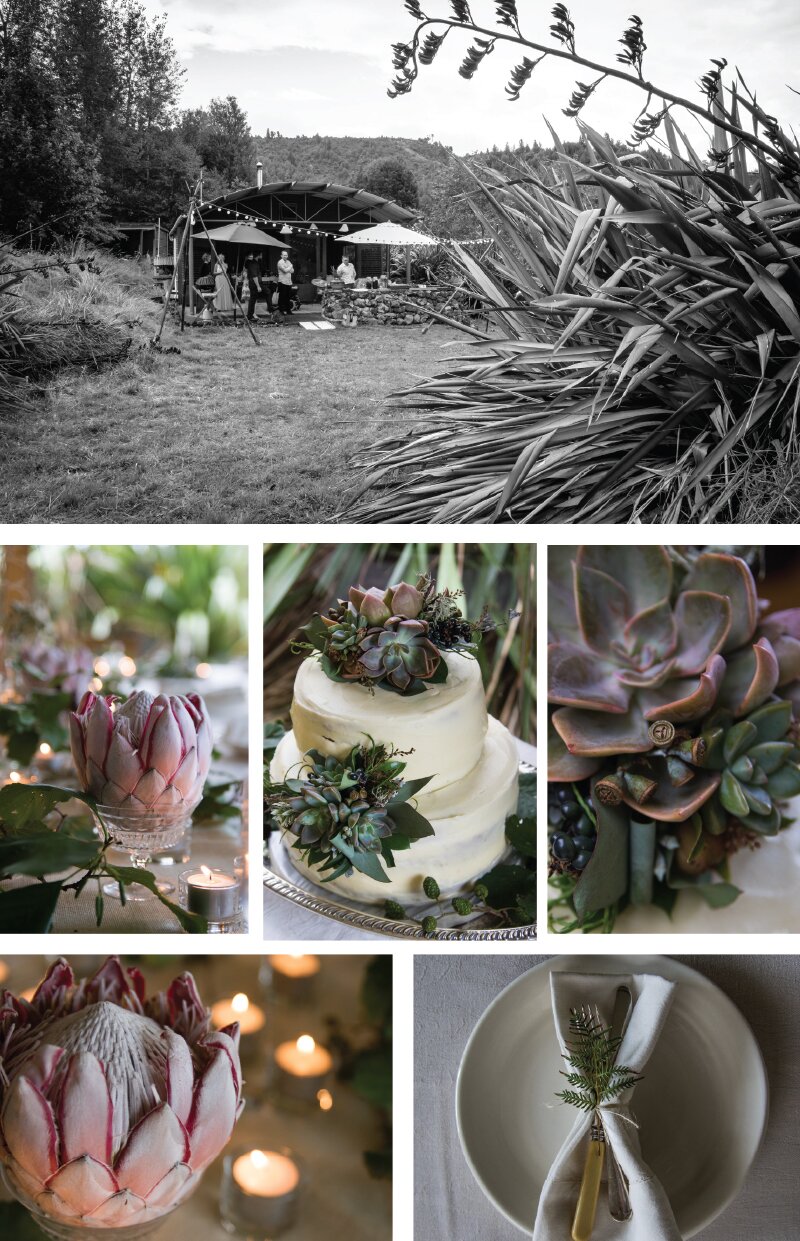 Can you share a Favourite moment from the day?
We had such an incredible day and we really loved every minute. Sitting down to our family dinner, the surprise bagpiper at sundown and the thunder right as we said our vows were all pretty amazing but I think one of our favourite moments of the day was following the ceremony.

We walked up the hill in our gumboots through the bush to Rupert’s late sisters’ Redwood forest while it was lightly raining and had some photos just the two of us. As we walked up there the sun pushed through the clouds and shone right down through the trees. It was absolutely magnificent and you can see the magical photos that Saffron captured up there, no tricks or filters required! Our guests might argue however that the wooden go kart down the hill was their favourite part of the day.

And finally, do you have any nuggets of advice for other couples planning a wedding?
Have fun and try not to let any stresses get the better of you because when the day finally arrives you will forget all of that and revel in the glory of the day.

Above all it is your day so make sure you both remember that and do it your way. By all means if the big traditional wedding is your jam definitely go all out but don’t succumb to the pressure of having to invite everyone including your aunties ex boyfriends cat if that’s not your dream.

Posted in News By

Paper Divas is a stationery company based on the sunny Gold Coast Australia. Consisting of a team of talented designers to ensure we have the best range of invitations on the web that you will love!